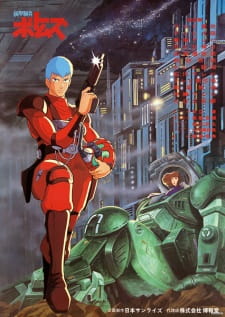 Plot Summary: A century of bloodshed between warring star systems has plunged nearly 200 worlds into the flames of war. Now, an uneasy truce has settled across the Astragius Galaxy... Chirico Cuvie, a special forces powered-armor pilot is suddenly transferred into a unit engaged in a secret and highly illegal mission to steal military secrets—from their own military! Now he's on the run...from his own army! Unsure of his loyalties and to cover their own tracks, Chirico is left behind to die in space. Surviving by luck, the renegade is now hunted by both the conspirators and military intelligence. He is driven by the haunting image of a mysterious and beautiful woman—the objective of their mission, and his sole clue to unraveling their treacherous scheme. But the conspirators will do anything to preserve their mysterious agenda...