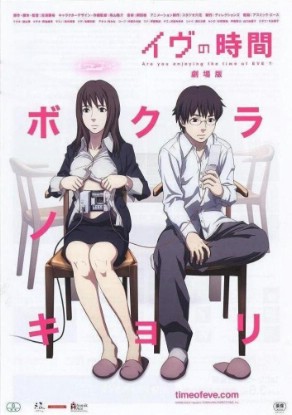 Plot Summary: In the near future, probably in Japan, long after robots have been put to practical use, and not so long since human-type robots, or androids have appeared. Due to the Robot Ethical Committee, people take it for granted to treat robots as electronic appliances. However, because of their human appearance, except for the halos above their heads, some humans — called dori-kei (android-style) — are becoming too attracted to these androids, and this is causing new social problems.Rikuo has been taught to treat androids the way he does since he was a child. He does not think of androids as human beings, and uses them as useful tools. One day, he discovers that ominous words were recorded in home-android Sammy's activity log:"Are you enjoying the time of EVE?"Tracing her footsteps with his friend Masaki, they arrive at a strange cafe that has put up the slogan not to discriminate between human beings and androids.

Other name: Time of Eve, イヴの時間